Lena Haloway can’t wait to be cured of love. In exactly 95 days, on her 18th birthday, she will be safe, no longer haunted by the grief and shame of her mother’s suicide, and the loss of her father. She will probably no longer be as passionate about photography or running, and will likely lose her connection to her best friend Hana, but that is a small price to pay for a calm and love-free future. In Lauren Oliver’s dystopian second novel DELIRIUM, love is a disease and the cure is compulsory. Lena is content to take her place in a system governed by duty and responsibility. But then she meets Alex, and everything she has known all her life begins to unravel, thread by thread.

Lauren Oliver is a 28-year-old writer and former editorial assistant, based in New York. Her debut novel BEFORE I FALL spent ten weeks on the New York Times bestseller list. DELIRIUM has already been optioned for film by producers Mitch Kaplan and Paula Mazur.

DELIRIUM is set in a future Portland USA, protected by electrified fences and controlled by curfews and citizen’s raiding parties. It is 64 years since love was identified as a disease, and 43 years since the cure was perfected. The borders of the United States are closed.

No one can get in. No one goes out. Every sanctioned and approved community must also be contained within a border – that’s the law – and all travel between communities requires official written consent of the municipal government, to be obtained six months in advance. This is for our own protection. Safety, Sanctity, Community: That is our country’s motto. (42)

Males and females are strictly segregated until the cure is administered at age 18. It is not yet safe to do the procedure on children, but scientists are working on that. There is no more hatred in the United States, and hardly any crime. Parenting, however, does have a few extra challenges in a society without love.

Thankfully, cases of full-blown detachment – where a mother or father is unable to bond normally, dutifully, and responsibly with his or her children, and winds up drowning them or sitting on their windpipes or beating them to death when they cry – are few. (7)

The only real blemish on the whole beautiful system is the Invalids, resisters who refuse the cure, and escape to the Wilds beyond the fences – people so ill that they don’t even realise they are sick. For love is ‘the deadliest of all deadly things: It kills you both when you have it and when you don’t’ (4). It killed Lena’s mother, who

had remained uncured despite three separate procedures, and the disease had claimed her, nipped at her insides, and turned her eyes hollow and her cheeks pale, had taken control of her feet and led her, inch by inch, to the edge of a sandy cliff and into the bright, thin air of the plunge beyond. (31) 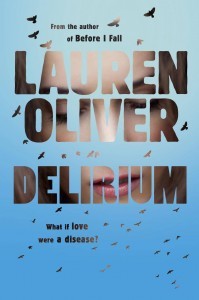 The narrative opens the day before Lena’s evaluation – possibly the most important day of her life. The score she receives will determine with whom she will be paired for life, once she has been cured – a list of four or five approved matches from whom she can choose. Lena’s unimaginative Aunt Carol has been coaching her in the best way to answer the questions: ‘the more generalized your answers the better chance you have of being considered for a variety of positions’ (14). Lena prepares diligently, but there is little she can do about her in-between physical appearance – neither thin nor fat, neither ugly nor pretty.

Her best friend Hana – tall, gorgeous and confident – is assured of a good score and a good match. Nevertheless, Hana seems dissatisfied with the process, and Lena is increasingly worried about her, looking for signs of the deliria that claimed Lena’s mother and very nearly destroyed her older sister as well.

“If they really want us to be happy, they’d let us pick ourselves,” Hana grumbles. “Hana,” I say sharply. Criticizing the system is the worst offense there is. “Take it back.” She holds up her hands. “All right, all right. I take it back.” “You know it doesn’t work. Look how it was in the old days. Chaos all the time, fighting, and war. People were miserable.” (20-21)

Lena is a card-carrying advocate of the passionless society the cure has created, but then, within days, she meets Alex, a guy who makes her feel things that terrify her. She resists fiercely, but the questions start to grow inside her, taking on a life of their own. Lena hurtles towards a crisis the reader knows cannot be avoided; our only uncertainty is whether Lena + Alex will end in joy or tragedy.

The story is told in the first person by Lena, and this technique works well in a novel where the perspective of the protagonist effectively is the story. As Lena discovers that her safe world is actually a totalitarian nightmare, the reader learns about it with her, from within her viewpoint within the system. The narrative is also told in the present tense, a device that is so often awkward, and yet Oliver somehow makes it work seamlessly.

Oliver has a deft touch with description. A ‘string of bright white buildings, glistening like teeth over the slurping mouth of the ocean’ (13). Salt blowing off the sea making the air ‘feel textured and heavy’ (14). A medical official with ‘big square white teeth that remind me of bathroom tiles’ (31). A woman who gasps when she realises she has been overheard, ‘and her mouth shut quickly, like a cork popping back into a bottle’ (46). Heat that is ‘horrible, thick, clotting on the walls’ (116). The curfew ‘about to come down like a giant warm embrace’ (172). A day that turns Lena’s world upside down but ‘still the sun rises and clouds mass and drift and people shop for groceries and toilets flush and blinds go up and down’ (302).

The sex and profanity content of the book is restrained, befitting a young adult audience. There are moments of moderate violence, but they are not gratuitous. The treatment of religion is thought-provoking; a perversion of Christian texts and ideas, similar-but-different to Aldous Huxley’s BRAVE NEW WORLD. In Huxley’s book, God was replaced with consumerism, and every reference to the cross became a T, in homage to Ford’s Model T. In Oliver’s book, God is retained but recast in the government’s image: a passionless ruler of a race of automatons. In Sunday school, Lena learnt about ‘atoms and probabilities and God’s order’ (284). The government-sanctioned library of texts includes a book called Genesis, which reads:

Last God created Adam and Eve, to live together happily as husband and wife: eternal partners … They were untouched by illness, pain, or desire. They did not dream. They did not ask questions. (234)

The beginning of this description of the original sinless creation sounds slightly-odd-but-kind-of-OK in comparison to the biblical Genesis, but then veers right away from the prototype from “or desire” onward. The religion sub-theme in DELIRIUM could present a whole springboard for a discussion by itself: how abusive systems – whether governmental or more personal – can preserve much of a sacred text but then just tilt the edges, to make it support their own ungodly agenda.

Most literature students reading DELIRIUM will hear inescapable echoes of the dystopian classics like BRAVE NEW WORLD and George Orwell’s 1984. Oliver’s book is more like 1984 where the populace is controlled by fear of punishment, than BRAVE NEW WORLD where hedonism is the political weapon du jour.

However, this book is a lot more fun than either of those. There’s the occasional warning about post-9/11 civil rights abuses lurking within for those who want to see them. But ultimately, DELIRIUM doesn’t seem to be trying to be a cautionary tale, just a cracking good read. Its central premise, summed up by Hana, is not political but existential: ‘You can’t really be happy unless you’re unhappy sometimes’ (23). And unlike the dystopian classics, it allows a little kernel of hope to germinate: perhaps the evil system can be overthrown after all? If we’re lucky, Lauren Oliver will write a sequel! This is an engrossing, thought-provoking and well-crafted read.

DELIRIUM on Amazon
DELIRIUM for Kindle

Writer. Accredited Editor. Speaker. Podcaster. Dream Releaser. Where am I? I live in Brisbane, … END_OF_DOCUMENT_TOKEN_TO_BE_REPLACED