I’m amazed to discover that I have just spent my seventh Christmas without my Dad. Where do the years go?

Christmas means summer here in Brisbane, and schools close for six weeks. When I was a kid it often meant a road trip. Sometimes we were visiting distant relatives, and sometimes it was simply the result of our parents’ affection for the outback. All seven of us would pile into our Kombi van stacked with luggage, cooking equipment, folding chairs, sleeping bags, colouring books.

There was the year we travelled 2000 km north to Cairns, and spent Christmas Day in our big canvas tent near a beach along the way. Dad chopped down a tiny pine tree from somewhere, we decorated it with foil milk bottle caps, and even though we’d received presents before we left home there were brown paper parcels under the tree for each of us — second hand books from the local book exchange!

There was the year we travelled 2000 km south to Melbourne. I still remember how it felt to drive into the dark streets of Sydney at the halfway mark — how eagerly I searched for lighted Christmas trees in the windows of homes we passed, and the thrill each time I glimpsed one.

Roads were rough and narrow back then, not the broad highways of today. At this time of year, when I hear cicadas screeching or currawongs calling while the sweat beads on the back of my neck, I’m transported back to those journeys through the bush. It’s almost as though my legs are once again sticking to those (non-airconditioned) vinyl seats.

Fast forward to 2008. I had just paid the deposit on a tiny caravan — what my US friends call a trailer. It was a retro van with yellow trim. I wanted a plain silver one, something more understated and discreet, but my Dad was delighted they only had a yellow one left. He liked the way it matched my little yellow Beetle. 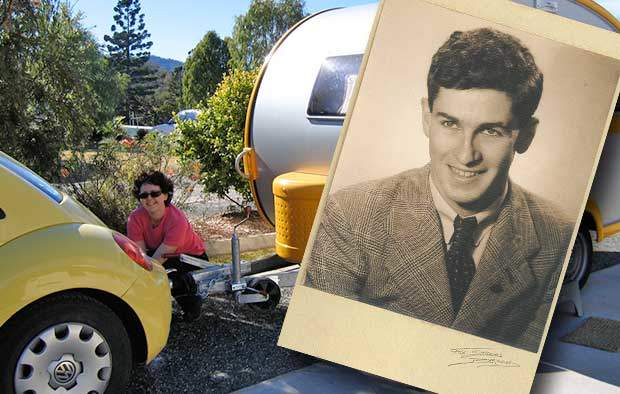 I had never yet towed anything in my life, and found the idea intimidating. But I knew it would be OK – Dad would teach me.

Dad was the undisputed King of Towing. His engineer’s brain had figured out the angles. He could reverse any trailer of any size into almost anywhere, without becoming flustered or scraping gateposts. He could even do this with strangers watching. Heck, he could have done it with a marching band going past.

He was a calm and patient teacher too, so I knew he’d get me on the right track with my new ‘rig’. And then we could go on some trips as a convoy – me in my little rig, he and Mum in their own.

Dad was there the day I signed the contract on the van, but by the time I took delivery just two weeks later, he was gone – a sudden brain haemorrhage. I was very close to my Dad, and his passing left an immense vacuum in my life, echoing with the things we were still going to do.

Among the many memories he left for me, the road trips are some of my favourites. The destinations varied, but some things were always the same.

First, my Dad could cobble together a ‘fix’ for any problem. Perhaps his most legendary triumph was the time in remote western Queensland that the trailer laden with our camping equipment suddenly lurched drunkenly and collapsed onto the axle, scraping and grinding. Dad pulled up in a cloud of dust and got out to survey the problem. In no time he fashioned a new ‘spring’ from a flexible sapling he cut at the roadside, and it got that crippled trailer all the way home.

Second, we often camped for free. My Dad was one of the most generous people I have ever met, but with five children and a lot of travelling to do, he had to be creative. For a quick overnight stop, this might be as simple as pulling off the road, throwing down a tarpaulin, tossing seven sleeping bags in a row on top of it, then laying another tarpaulin over the lot, in case it rained in the night.

Third, we arrived late. Always. To be honest, this was not entirely and completely Dad’s fault, but it was inevitably his decision to ‘press on to the next town’. I have so many memories of setting up camp in failing light. In fact, I’m not sure I know how to pitch tents in daylight.

A couple of months after Dad died, that little yellow caravan was still looking at me, and I knew if I didn’t do something with it now, I never would. I invited my mother to join me on the inaugural road trip to a tiny gold mining town 400 km from Brisbane. I was nervous about the towing, and I wondered if either of us would be able to bear my father’s palpable absence – he really should have been there for this.

First, we ran late – very late. The plan was to get an early start, but after endless rearranging and fussing, I tentatively towed the little van out the driveway at 7pm. Yes, you read that right. 7 o’clock AT NIGHT. It was already dark, and we had at least five hours driving ahead of us, but like my father, I didn’t want to lose another whole day.

Second, we camped by the roadside. By 9pm, I had come to the conclusion that I was too tired to attempt a midnight arrival over winding mountain roads cluttered with kangaroo-hazards (kangaroos and car radiators do not mix). So we pulled into a roadside parking area, joining a row of slumbering caravans. I glowed with a strange satisfaction as I lay there listening to the heavy transports roaring up and down the highway just a few metres away, thinking of how it would have pleased my father that I was camping for free.

Third, we had a problem, and I ‘fixed’ it. The latch malfunctioned on the van’s skylight, so that it was flapping wildly in the air as I drove. I looped a rope through the skylight, anchored it to the legs of the dinette table, and drove on. Not very elegant, but it got the job done.

There were definitely some tears on that journey, as we remembered the one who was missing from it all. But I made brand new memories of my own, built on my father’s legacy. Dad might have left for the ultimate road trip, but part of him will always be there driving with me.

Arriving home a few days later (late and in the dark, of course!) I somehow managed to reverse my little rig into nearly the right spot in the backyard. I’m sure I’ll get better at that. I am my father’s daughter, after all.

Writer. Accredited Editor. Speaker. Podcaster. Dream Releaser. Where am I? I live in Brisbane, … END_OF_DOCUMENT_TOKEN_TO_BE_REPLACED