Journalist and speaker Philip Yancey has entered some of recent history’s most troubled moments, conducting interview research for his books and articles, and presenting speeches at conferences and other gatherings. WHAT GOOD IS GOD? is his attempt to draw together those experiences into a meaningful answer to a question facing many people of faith. If hatred, terrorism and oppression is rampant in the world, and if many of God’s followers are judgemental and destructive, what is the good of having a God at all?

Philip Yancey is the posterboy for intelligent-but-convinced Christianity in the USA, and has written 20 books which have sold upwards of fourteen million copies. His bestsellers include DISAPPOINTMENT WITH GOD, WHAT’S SO AMAZING ABOUT GRACE? and THE JESUS I NEVER KNEW. He writes clearly and often eloquently, with a journalist’s eye for observation. He also has a knack for latching onto the issues that people want to read about, and an honesty about his own struggles with doubt that is both refreshing and engaging.

WHAT GOOD IS GOD? is structured around ten speeches delivered by Yancey to audiences in the USA, Africa, China, the Middle East, England and India. Each chapter is divided into two sections – one introducing the setting of the speech, and one for the text of the speech itself. His diverse collection of listeners includes missionaries, oppressed minority groups, people who have recently survived massacres, and professional sex workers. Yancey describes himself not as an authority but as a fellow pilgrim still seeking his own answers:

The question ‘What good is God?’ occurs in some form to every person who experiences pain or death or unfairness – in other words, to everyone. Indeed, as I look over the last few years’ itinerary, it seems clear that I deliberately choose journalistic assignments that contribute to my own search. (8) 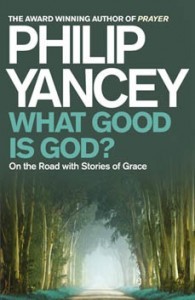 The first of Yancey’s speeches is delivered to students at Virginia Tech in the USA, a week after a disturbed student massacred 32 students and faculty and then shot himself. Yancey describes his own recovery from a near-fatal spinal injury received in a car accident six weeks earlier. Just getting to Virginia for the speech is dangerous for Yancey, in case a jolt dislodges any unhealed bone fragments and pierces an artery. Supported by a neck brace, the author tells his audience of a prominent Christian leader who went through a tumultuous time with his family and was then diagnosed with cancer. This man asks the question: ‘What is God good for?’ and none of Yancey’s answers seem to help, until he discovers a phrase in a book some weeks later.

It read, ‘Nothing irredeemable has happened or can happen to us on our way to our destiny in God’s full world.’ I went back to my friend. ‘What about that?’ I asked. ‘Is God good for that promise – that nothing is irredeemable?’ ‘Maybe so,’ he answered wistfully. ‘Maybe even this can be redeemed.’ (28)

In Green Lake, Wisconsin, Yancey addresses a conference for people who minister to professional sex workers. He writes honestly of his uneasiness with the situation.

The only man in a roomful of women, I was hearing horrifying stories of male cruelty and exploitation. Before today I had never met a prostitute and now dozens surrounded me … They talked about sex acts matter-of-factly, as a car salesman might talk about tyres or sunroofs. What had I got myself into? (61)

Yancey’s discomfort transfers to some awkwardness in the writing of this chapter – he is all elbows with it, clearly not sure how to write about the sex trade. Nevertheless, there are moments when the writing flows, as he tells of hearing ‘stories of desolation and of redemption … gripping accounts of what happens when a woman rejected by everyone else suddenly grasps that she is not rejected by God’ (71).

In other chapters, Yancey writes about his literary hero C. S. Lewis, powerful moments of reconciliation in post-apartheid South Africa, and his own survival of a crisis of faith at a legalistic Bible college as a teenager. The experiences conveyed are significant and the writing is solid, workmanlike, and clearly expressed. It is a quality piece of work which will stand out from many other books of its type.

Nevertheless it doesn’t quite have the piercing insight found in some of Yancey’s other work – neither the mind-altering discoveries of The Jesus I Never Knew nor the raw self-revelation of Reaching For the Invisible God. The disparate nature of the stories makes it hard to grasp the thread of writerly passion tying the whole together – it keeps slipping away. Perhaps it is that Yancey is most compelling when he writes about his own internal struggles, and this book is written largely in the role of observer.

The book finishes strongly however, with Yancey observing from inside the tenth experience he describes. The writing of the final chapter clicks, as the author finds himself in Mumbai the night of a 2008 terrorist attack that left 172 people dead. The author’s love for a country that plunges him into sensory overload shines through as he waxes lyrical about an earlier tour with famed leprosy doctor Paul Brand in 1982: ‘I got a sore neck on that first visit, turning this way and that to take in the sights of the five-ring circus that is India’ (240). His 2008 speaking tour is plagued with misbehaving PowerPoint slides, car alarms disrupting outdoor venues, and sudden power cuts.

I stood there awkwardly for a few minutes not knowing what to do, until someone yelled, ‘We can still hear you!’ and so I shouted into the darkness until lights and power came back on. To me, it felt like combat-speaking, but Indians are patient people and nothing seems to rattle them. (245)

The night of the terrorist attack, instead of being in a downtown tourist hotel in the centre of the mayhem that was to unfold, Yancey and his wife are on an itinerary detour in a private suburban home – an ‘accident’ that may well have saved their lives. He switches to present tense at this point of the narrative, and it is an effective device for bringing home the shocking nature of events that follow in three days of fear, including the story of a female journalist text-messaging articles from her hotel room.

She barricades the door with furniture, but still feels vulnerable. She’s a good writer, and, reading her account, we share her fright. The next day the newspaper prints her final message, written from under her bed – ‘They are in my bathroom. This is the end for me –’ with an editor’s note that commandos have found her body. (248)

Yancey’s scheduled speaking engagement is impossible as terrorists continue to ravage the city centre, but locals want to hold an impromptu meeting in the suburbs. The author is reminded of the night of 9/11 in his hometown, when his church ‘spontaneously filled with hundreds of people’.

No one announced or planned a meeting. Stunned, grieving, afraid, we went by instinct to church, to join with fellow believers in prayer. If our faith matters at all, it must matter at such a time of crisis, and inadvertently I had just found myself in the midst of another faith-testing crisis. (250)

Despite what he has seen and experienced, Yancey remains a convinced believer in the Christian God, and his target audience seems to be people who also believe. However, WHAT GOOD IS GOD? would probably also interest readers who are curious or unsure what they believe, and want to hear from someone who has looked at the dark side of faith and yet still holds onto it. Others will disagree, but in my opinion this is not Yancey’s finest work. Nevertheless it is a solidly written book, well-observed and with plenty of dialogue and human interest. Even when not at his exquisite best, Philip Yancey can be relied upon to produce something worth reading and thinking about.

Writer. Accredited Editor. Speaker. Podcaster. Dream Releaser. Where am I? I live in Brisbane, … END_OF_DOCUMENT_TOKEN_TO_BE_REPLACED